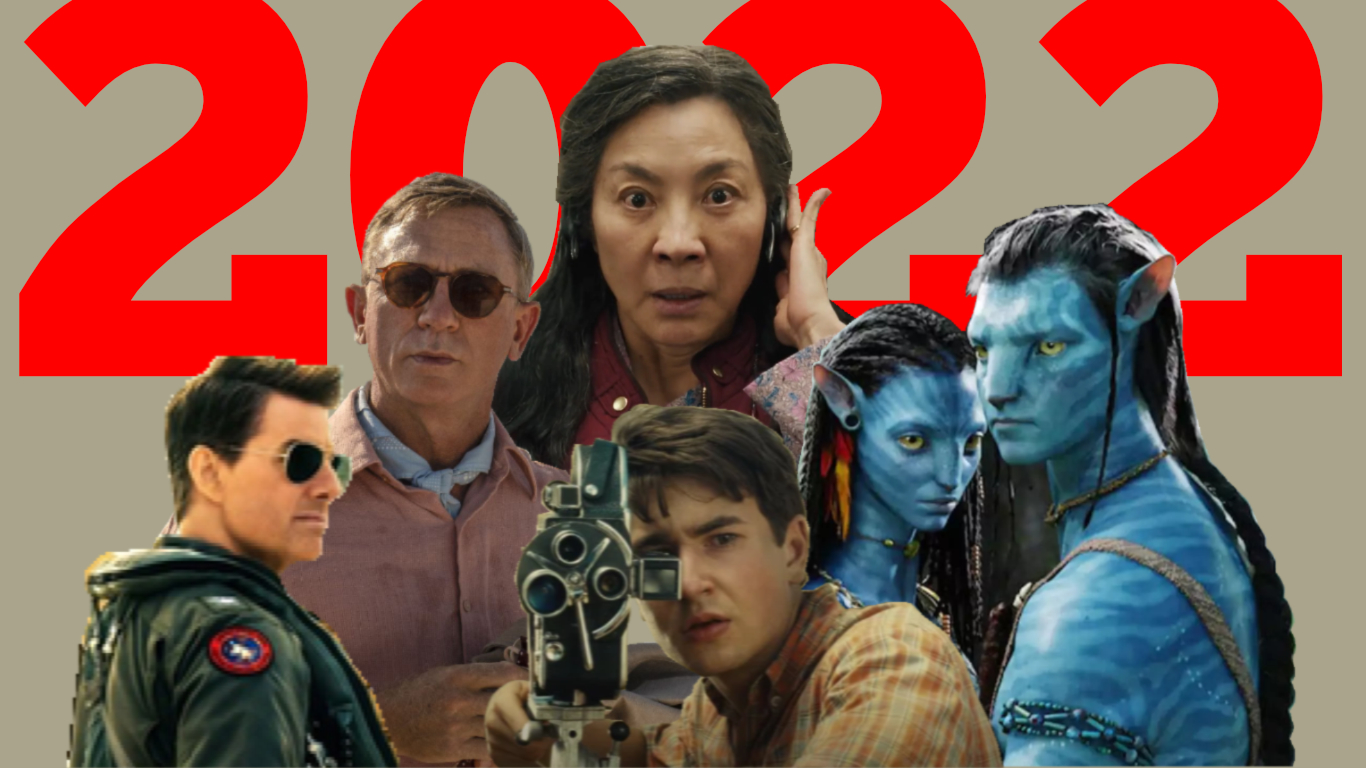 Nope is a detour from the work we’ve come to expect from Jordan Peele, in more ways than one. The film is less scary than Get Out and Us and, with that, it also feels less dependent on groundbreaking performances to lead the audience through frightening twists and turns. In a more reflective sense, it seems that Peele embraced the fact that Nope would be divisive. He has taken advantage of the reputation he’s made for himself by leaving behind an insistence on plot details and shocking character revelations, instead coming out with a Spielbergian, open-landscape adventure, with a story that relies more on spectacle than ever before in his oeuvre. It’s also the first horror film to be shot on IMAX cameras.

Probably the most unknown film on this list, After Yang sees director Kogonada take sci-fi elements from the great works of Isaac Asimov and Philip K. Dick and, rather than presenting its AI concept through a broad and showy angle, tells its story on a small, intimate scale. Colin Farrell goes for a quiet, reflexive performance here, that complements the mysterious tone of the film.

If there is any film on this list I encourage the reader to go into completely blind, it is Barbarian, one of the most surprising and original horror films in years. At a time when the genre is peaking with the likes of Ari Aster and the aforementioned Jordan Peele taking stage, it can become harder for new directors to make a name for themselves, which is exactly what Zach Cregger did here. Barbarian takes classic horror tropes and works them in to relate to the fears of today, right before it rips the rug right out from under and leaves the audience having no clue where the story will go next.

9. Glass Onion: A Knives Out Mystery

It is a genuine shame that Rian Johnson’s Knives Out sequel did not get a longer theatrical run. While I do believe this murder-mystery thrill ride will be a great time for families come this holiday season to check out on Netflix, experiencing this who-done-it amidst a crowded theater was something really special. Daniel Craig is back and better than ever as Benoit Blanc, this time dealing with rich-tycoons and influencers instead of the publishing family. While the commentary on how strange everything has become in the post-Pandemic world might come off as forced in a lesser writer’s hands, Johnson brings his A-game here and recreates what made the original so special in the first place.

Decision to Leave is far from your average investigative crime story. Though the story is inspired by classic Alfred Hitchock films — notably Vertigo — legendary Korean filmmaker Park Chan-wook breaks away from his gratuitous tendencies to bring a twist on the neo noir genre. After a man’s body is found at the bottom of a mountain, detective Hae-joon arrives to determine whether he fell or he was pushed. Everything goes wrong when the femme fatale wife shows up, played by Tang Wei in a mesmerizing performance. Innovative camera techniques, scene transitions, and sound placement work to make Decision to Leave is one of the finest directed movies of 2022.

7. Avatar: The Way of Water

James Cameron is an absolute madman and I am sorry for ever doubting him. We all were unsure whether this sequel would ever come, but now that it’s here, I cannot wait to return to Pandora and watch it over and over again. Avatar: The Way of Water is a vast improvement on the original in every way possible, from the jaw dropping VFX to the scope of the world being presented, but that should come as no surprise from the man who brought us Terminator 2: Judgment Day and Aliens, two of the most outstanding movie sequels ever.

6. The Banshees of Inisherin

This one was a big win for In Bruges fans, myself included. Martin McDonaugh teams up again with his best duo in the form of Colin Farrell and Brendan Gleeson, but this time they don’t play hitmen awaiting orders in the worst city to visit; instead, they are simply two drunks who are no longer on the same page about their relationship, as Gleeson declares one day “we are no longer friends.” Whereas he is more open to admit his age catching up to him and that he is experiencing some form of existential depression, Ferrell keeps himself oblivious to this truth. It is a simple concept for a movie, but the sharp dialogue and hard questions asked are what makes Banshees a moving and one-of-a-kind experience. Shoutout to the donkey!

5. Everything Everywhere All At Once

Not much can be said about the Daniels’ new sci-fi, action, identity film mindbender that hasn’t been written in spades already. Everything Everywhere’s culture shock originality feels what The Matrix probably felt like when it hit theaters back in 1999. Ambitious and absurd to the point where it can seem stand-offish on paper, Michelle Yeoh and her wonderful supporting cast bring so much heart to this story that there is something for everyone to cherish in this film. Who would have thought that two rocks looking at the scenery could bring out so much emotion?

Truth be told, the original Top Gun does not hold up all too well. Maybe it’s because I was born almost 15 years after its release, but the film’s strange melodrama and jingoist legacy made me skeptical for this 36-year late sequel. How good it feels to be wrong though, as Tom Cruise proves time and time again that he might be the last of the true movie stars. Here, he and director Joseph Kosinski have taken a dated story and made it feel timeless, with better action that really emerges you into the jets, a stronger narrative at the center, and just the right balance of goofiness and seriousness. I can’t wait to see Cruise top himself yet again next year with Mission: Impossible 7.

Director Rober Eggers has a real knack for immersing his audience into a specific period; whether he transports us to 16th century England amidst fears of Paganism spreading, as seen in the utterly-creepy The Witch, or just on a small island in the 1890’s with two dudes completely losing their minds as time passes by in The Lighthouse, the point is that the man pays attention to each and every detail to bring a real original experience. In The Northman, he presents that world as barbaric and grotesque as it was, refusing to shy away from the real-life horrors of that time. The story is fairly simple, a revenge tale of a boy who must grow up and avenge his father, but the ride he takes us to get there is action-packed and unforgettable.

And here I was thinking that superhero movies were officially dead. Matt Reeves’ The Batman takes a story we have literally seen hundreds of times before, but never has the man in the bat suit himself been so introspective. Taking off just a couple years after Bruce Wayne has adopted his alter ego, we are presented with a genuinely ugly Gotham that seems beyond saving. This is the darkest iteration of the character to date, more so than the Burton films and certainly more so than under Nolan’s direction. The journey that Batman takes to discover hope again and recognize the consequences of his actions is breathtaking, accompanied by Greg Frasier’s gorgeous cinematography, music by Michael Giachhino that won’t leave your head, and an all-star cast of Robert Pattinson, Paul Dano, John Tutorro, Zoe Kravitz, Colin Farrell, and more.

Were it not for Steven Spielberg, none of the other films listed here would probably exist today. The 75 year-old legend is responsible for blockbuster filmmaking as we know it, kicking off the genre with the classic Jaws back in the summer of ‘75. Since then, he has tackled pretty much any genre you could imagine, from war movies to science fiction to political thrillers, and while he has used his personal upbringing as part of the basis for plenty of the stories he’s brought to the screen, never before has he so directly confronted his life for the world to see. In The Fabelmans, we get to see what it is that drew Spielberg so attached to the camera, the icons who shaped his perception of what movies could do, and, of course, the trauma he experienced both at home and out in the world.

As of writing, The Fabelmans is still playing — and underperforming — in theaters, and I cannot recommend seeing it on the big screen enough. It will make you laugh, cry, scream…all those things that great movies can do.

Aftersun, All the Beauty and Bloodshed, All Quiet on the Western Front, Babylon, Bardo, Bones and All, Crimes of the Future, Fire of Love, Guillermo del Toro’s Pinnochio, RRR, Tár, Triangle of Sadness, The Whale, Women Talking