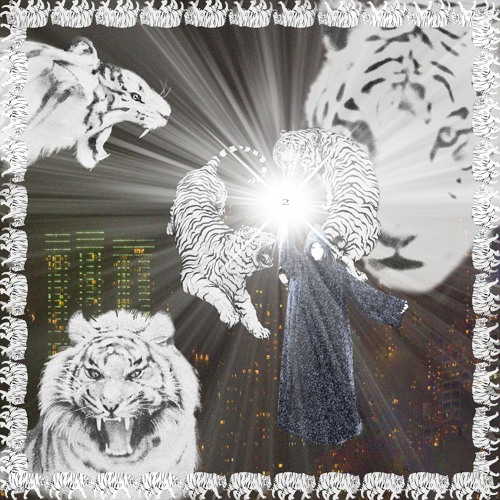 Although featured on the Spotify hyperpop playlist, the term seems long-expired to describe where 2hollis is right now. Elements of dubstep, electronic, rap, and a genre made by his former group OSX named “chainmail” are the best comparisons but there’s another element hard to describe that rolls it together into something I described in a previous review as, “spiritually pure music”. The heavy bass, echoes of vocals, repetition and lyrics create an experience order of magnitude bigger than the sum of its parts. If you turn it up loud enough and slowly lean your head into the wall of heavy liquid bass that faces you head on, it’s purely spiritual.

In Chinese culture, the White Tiger is a symbol of enlightenment and unwavering confidence. A being of enormous purpose from birth that’s finally come into its own. After creating one of the tightest-knit EPs I’ve ever heard in 2021’s META, I knew Hollis had broken onto the scene. But after 2 confusing albums and many singles later I wasn’t sure if he could harness the same raw energy he had when releasing META, short for Metatron, a scribe chosen by God in Jewish mythology. After that he downgraded to THE JARL, centering himself around as the overseer of his kingdom but was racked by the guilt of his conscience as human. His next release, FINALLY LOST, felt confused in its way of expanding the sound into more mainstream beats, a sentiment that would ultimately match the title. After time has passed, Hollis has now poised himself in the form of the White Tiger.

I’ve found anytime he mirrors a chosen one or god-like persona around the release of a project, he harnesses that energy into every aspect.

More than just spiritual, this is a matured spirituality only acquired by experience. Quick interludes of Rasta songs and Chief Keef beats break the tension of songs and show a growth in the normally serious electronic trap beats indicative of a Hollis song. The same applies to the tone flip in “i do”, from a solemn build up to a dance beat. The latter half of “the actor” even resembles a dungeon synth beat like that of holedweller. There’s a light heartedness you hear in these songs that was missing before. The uber macho lyrics you might have heard in other rap songs and previous projects are fading out as he realizes the frailty of those characters he might have played or admired. What stands in its wake is a more mature artist and person.

When listened to in its entirety, no song fails to earn its place. Although some earn it more than others, every album needs its interludes and singles. “Actor” is an obvious standout for its intensity, lesser so for its lyricism. Emotions serve to fill in the lyrics when those seem sparse. “Safety” is another that has racked up 100,000 plays already with a bouncier beat and yet more solemn lyrics that have been distorted in the same way they would have been a decade earlier in a dubstep song. Deeper cuts that I also liked on the album are songs like “i always questioned it” and “give it up”. The cadence on these tracks vary from confession to chants in a way that I haven’t heard since a year prior on META EP.
I’ll never have an experience like the first time I listened to 2hollis. It was something otherworldly and the nostalgia for even a year ago blasting that EP, singles, and snippets will put it at the top of his discography forever for me. But White Tiger is an artist coming into his own again, inviting others to submerge their heads into the waves of bass and hypnotic lyrics that can create such a rich experience. If 2hollis continues to embody figures like the White Tiger, Elohim and Metatron, I don’t doubt he would become an artist in the fullest sense of the world, something closest to godliness.