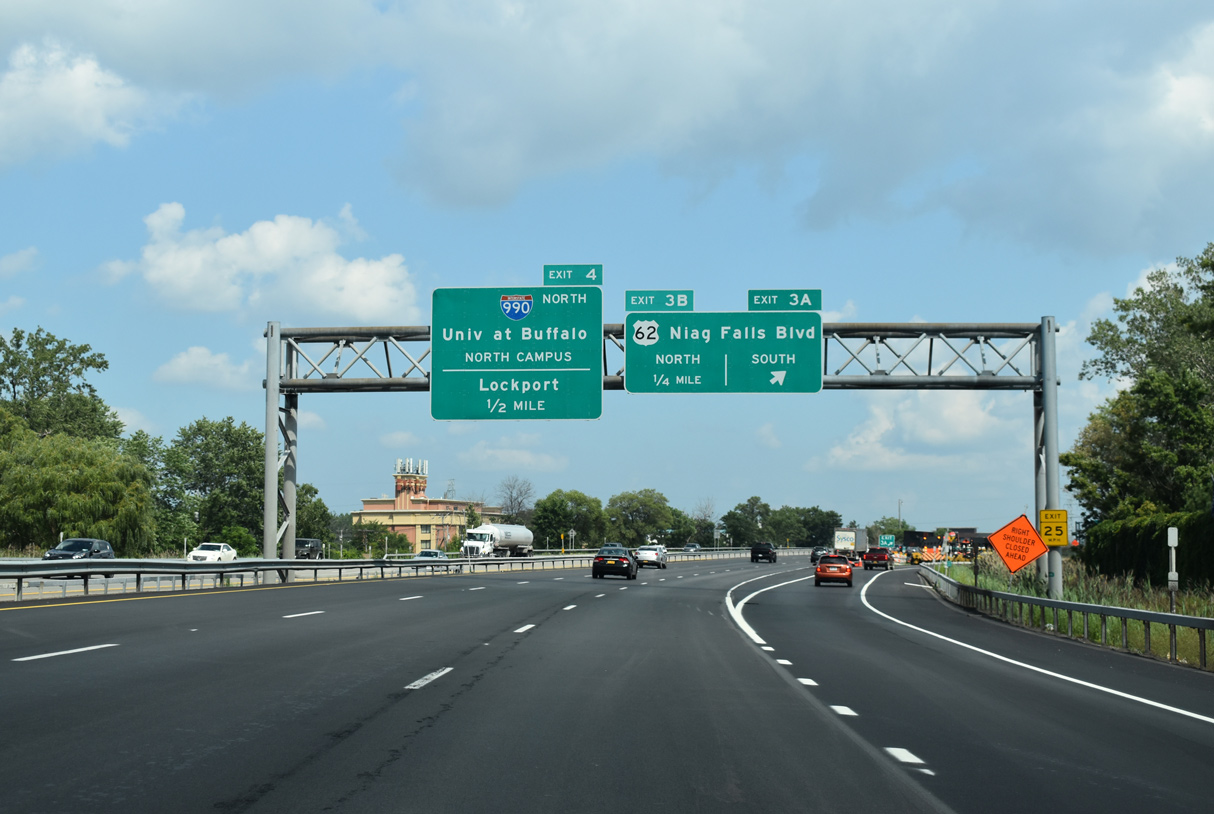 The 290 to 990 is a convenient side door to North Campus for anyone coming in from Amherst or North Buffalo. Keep driving past the campus, however, and 990 offers only four more exits with not much to offer — a small, suburban apartment complex, a smattering of houses on Dodge Rd., the woods, and for the big finish, an intersection with Millersport Highway in an empty field.

Is that enough to justify its own interstate? Of course not. So why do we have an interstate to nowhere next to North Campus? Let’s just say someone got ahead of themselves.

In the 1950s, when the Interstate Highway System was planned out, Buffalo was still a booming industrial center. Steel, manufacturing, and Great Lakes shipping were all thriving, without a thought in anyone’s mind that all three of those things would shortly collapse all at the same time. Buffalo was growing, and as the saying goes, what goes up, must continue to go up forever and ever without stopping! That’s how the saying goes, right?

Lockport, 15 miles north of North Campus, is an unassuming burg of 20,000 people. But in the 1960s, it was a rapidly growing metropolis of 26,000 people. Overly-optimistic predictions of wild, uncontrolled growth convinced the NYS Department of Transportation to extend the interstate to Lockport. (The same wide-eyed optimism led to the insanely ambitious original plan for North Campus, which included a 22-tower Hochstetter/Cooke complex with more floor space than the Empire State Building.) The first leg of 990 was built in 1968, extending to a more or less empty stretch of French Road. But great things were coming!

Except they weren’t. Before the pavement was even dry, Lockport’s population, after 100 years of steady growth, began to decline. Buffalo’s mighty economy began to collapse. No one needed a highway to Lockport. The second half of 990 was never built; in 1990 the Department of Transportation admitted defeat, adding a small addition that abandoned 990’s original route for a quick connection to Millersport and a merciful end to a highway that could have been just as effective as a 290 off-ramp into campus.

The last remarkable thing about 990 is that, ill-conceived as it seems now, it beat out plenty of other ideas. There was plenty of federal money for highway expansion up for grabs in the late ‘60s, so other proposals included a north-south run from Blasdell to Niagara Falls (which would have likely involved somehow turning Bailey Ave. and the rest of route 62 into an elevated highway), and an east-west expressway from Lockport to Rochester, either running along the south shore of the lake, or following route 31, which currently connects the two.

Next time you plan that road trip to Rochester, all you can do is rue cruel fate for not making it easy to stop off in Lockport on the way.