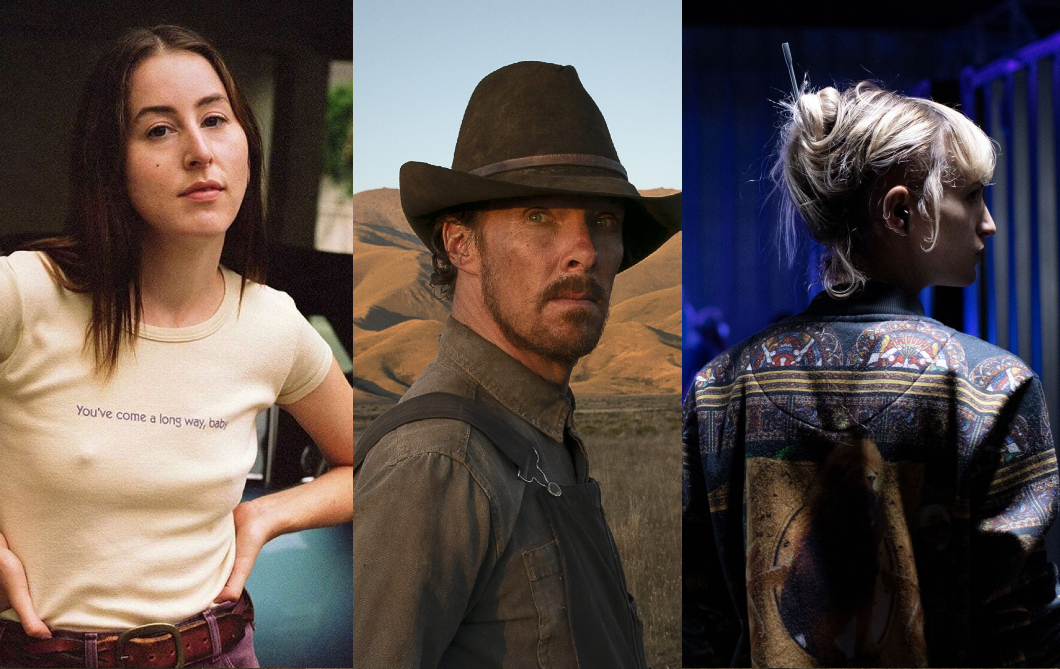 Another year of the COVID-19 pandemic meant another year of films (and filmmakers) barely scraping the barrel in terms of recognition and financial success at the box office. Theaters slowly started to open, but with new variants of the virus making headlines left and right, the easy access of content on across tons of streaming services (HBOMax even putting their films on their channel the same day as they get wide releases), and an overall lasting fear people hold of being surrounded in large crowds, the question of if cinema is “dead” still remains in question. However, I would argue that, while the state of cinema as we know it currently stands within a scary uncertainty, the quality of films has far from declined. Here are just ten of many films that prove it:

Starting off this list, we have two period pieces that succeed within their respective zeitgeists and make their worlds feel fully lived in.

Musician Jeymes Samuel makes a daring directorial debut with a gunslinging, gorgeously shot western revenge story that brings the genre back to the forefront. This time with an almost exclusively black A-list cast — ranging from Jonathan Majors, Zazie Beetz, and Delroy Lindo as our heroes, pinned against Idris Elba, Lakeith Stanfield, and Regina King filling in for the film’s villains — that functions to remind audiences these tales are not simply fiction. The Harder They Fall is one of the most exciting things to check out on Netflix right now.

Guillermo del Toro’s film is a remake of a 1947 classic, and covers ideas ranging from the distinction between psychology and mysticism, to the unparalleled wealth that industrialist tycoons saw in that era. Bradley Cooper brings a fully-lived performance as a man posing to communicate with dead, and the relationships he forms with the various women he encounters as he digs himself further into a rabbit hole — Toni Collette, Rooney Mara, Cate Blanchett — each bring a new level of depth to this strange, gruesome tale. No creatures are found, which is a first for the Mexican Oscar-winner, but this is nonetheless a del Toro picture through and through.

Undeniably the most “Wes Anderson” of all the movies in Wes Anderson’s library, The French Dispatch comes jam-packed with all the usual quirks and idiosyncrasies of his works. Broken up in three separate acts all serving to tell a greater picture about journalism’s glory days, each is so infectiously tender that it’s easy to get sucked up in these colorful, miniature worlds. With names including but not limited to Benicio del Toro, Adrien Brody, Frances McDormand, Timothee Chalamet, and Jeffrey Wright, who wouldn’t be excited for what’s in store?!

Paul Schrader has arguably the darkest and most sadistic mind in all of Hollywood (no offense, Charlie Kaufman) and The Card Counter is a perfect showcase. Starring Oscar Isaac as another one of God’s lonely men struggling with his past demons, the state of our world (see: First Reformed), and the unsettling presence that is Willem Dafoe, his character looks toward poker as a sort of eternal purgatory after committing war crimes. Of course, this is easier said than done and his past inevitably comes back to haunt him. Schrader pulls no punches here in his relentless criticism of our nation’s ever-increasing jingoism.

Frank Herbert’s Dune novel has always been considered an impossible task to adapt, although it has never stopped filmmakers including David Lynch from trying, and largely failing. This time, however, Denis Villeneuve — arguably the greatest rising filmmaker of the past ten years — was able to respectfully take the greatest aspects of a giant story and incorporate with it his directorial traits. He already succeeded at creating a Blade Runner sequel nearly thirty years later, and once again audiences were not let down with this story of family, love, hope, and even betrayal. Science-fiction seldom gets grander than here.

What was likely the most mismarketed film of the entire year, The Green Knight was a far cry away from the medieval action extravaganza people were expecting. Instead, what we got was a beautiful tale of a making a deal with the devil and honoring one’s promises, accompanied by a breathtaking production and tortured central performances from Dev Petel and Alicia Vikander. Anybody who is familiar with director David Lowery’s work (A Ghost Story, The Old Man & the Gun) knows he has a deep fascination for fantasy and myths, and more importantly how these stories are passed down in time: The Green Knight is no exception.

The Daniel Craig James Bond era has seen its highs and lows, but one thing that has consistently remained true about this franchise is that it differentiates from its predecessors by attempting to tell a singular story throughout all five features. With that, Cary Joji Funukaga’s No Time to Die is Bond’s most emotional and cathartic adventure yet, following up with the questions presented by the divisive Spectre and properly answering them. The film also succeeds remarkably at blending the old Bond’s campiness and wild set pieces with the new grit and realism that burst onto screens in 2006’s Casino Royale. Come for the action and the cars, leave with tears as you see Daniel Craig suit up one last time.

A far departure from Joaquin Phoenix’s previous performance in Joker, Mike Mill’s C’mon C’mon looks is a quiet, nonviolent film that looks for the beauty in human relationships and growing up. Mill’s films can usually be summed up this way, from the complicated father-son dynamic in Beginners to a group of mothers struggling to raise a boy in 20th Century Women but his latest endeavor is certainly no rinse and repeat. As Phoenix’s Johnny travels across the U.S. with his nephew to interview adolescents about their thoughts on their country and their futures, the film revels in those little moments life brings us that remain in our memories years on. Shot in black and white to emulate a sense of confinement that both childhood and parenthood can bring, C’mon C’mon is nothing less than movie magic.

Jane Campion’s long hiatus from filmmaking has made the wait certainly worth it with her adaptation of a Thomas Savage novel. In The Power of the Dog, Benedict Cumberbatch and Jesse Plemmons play brothers in 1920’s Montana working on a ranch who could not stand further from one another, and not just in looks. Whereas Plemmons plays an almost too kind person who lets others step on him, Cumberbatch is relentless in his determination for control. Things become complicated when they meet a struggling mother and her adopted, flamboyant son (played by Kirsten Dunst and Kodi Smit-McPhee, respectively) as one brother attempts to join their family and the other is disgusted by such acts of kindness. The constantly shifting power dynamics keep the film always one step ahead of the audience, and the Johnny Greenwood score that accompanies these moments brings a truly unsettling presence.

Paul Thomas Anderson returns once again to the 70’s San Fernando Valley in this magnetic, joyful ode to the world in which he grew up. Licorice Pizza stars newcomers Alana Haim and Cooper Hoffman (son of his once-most frequent collaborator, the late Philip Seymour Hoffman) as they attempt to make sense of the incredibly competitive entertainment industry. When that fails, they place their bets in various wacky business ventures and, when all else fails, even look toward politics. Yes, there is an age gap between these two characters, with one being 15 and the other claiming to be 26 (it is likely mistruthful) but that is far from the essence of this picture. Instead, Licorice Pizza captures two individuals who are lost in this world and have nobody by their backs except for one another, even as a number of notable names (Bradley Cooper, Sean Penn, etc.) come into their lives. Unquestionably, this is the funniest film of 2021.

Talk about this year’s ending! An absolutely shocking grand prize winner at this year’s Cannes Film Festival, Julia Ducournau’s sophomore effort is perhaps the boldest film of the entire year. Dealing with, but not limited to themes regarding sexual identity and transitioning, family expectations, and trauma, yet told through a lens of body horror and violence, Titane is unlike anything before it. As I’ve contested earlier here, it is a film which is hard to discuss without getting into spoilers, but it is no spoiler to state that this is sensual, provocative tale, carried by year-best central performances from Agathe Rousselle and Vincent Lindon is a once-in-a-lifetime experience; the epitome of cinematic language and bringing the medium to bold new heights.