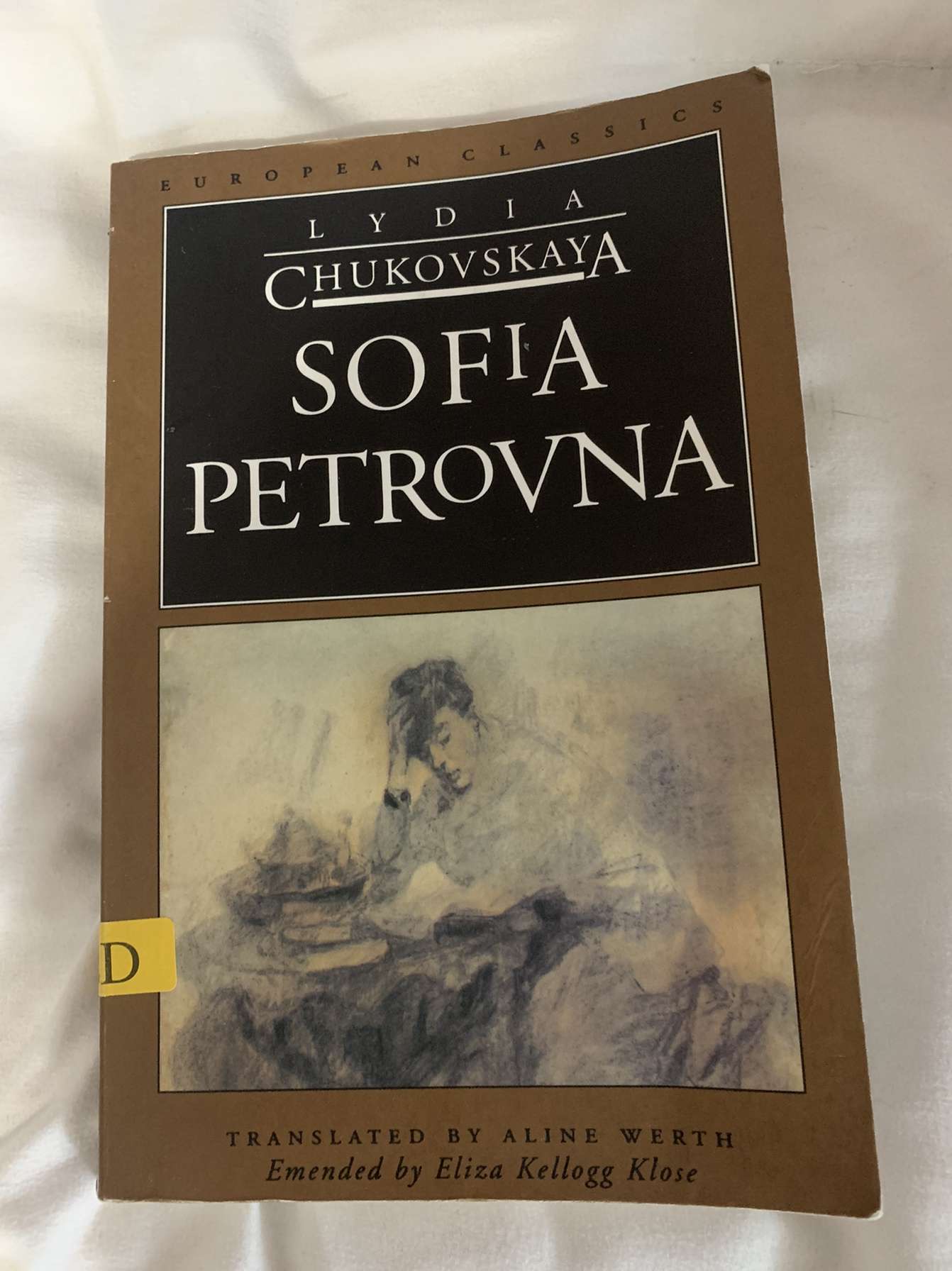 In her novella Sofia Petrovna, Soviet dissident Lydia Chukovskaya offers an intimate portrait into the realities of the Soviet Union’s Great Purges of 1937 and 1938. The novella conveys the atrocities committed during the Stalin era from the perspective of an ordinary citizen — a simple minded and devoted mother. One of the few surviving accounts of the Great Purges written contemporaneously, Chukovskaya offers deeply personal insights beyond the chilling numbers, names and statistics that are all too familiar to many. At its heart, the book recounts, through fiction, the story of a society corrupted by terror and destruction in the most deep-seated and all-encompassing ways.

The novel aims to offer readers a window into all that was lost during the purges, and relatedly, warn readers of the potential for government sanctioned terror to distort even the seemingly most unassailable truths — a mother’s love. Opening with a portrayal of Sofia Petrovna and her son’s devotion to the Soviet regime, Chukovskaya leaves no ambiguity as to the family’s innocence during the purge era. Sofia, an ordinary typist, has always been blindly supportive of the Soviet regime. Her only child and surviving family member, Kolya, is an enthusiastic and exemplary Soviet citizen; a passionate young supporter of the Soviet regime and all it stands for. Kolya is also a stellar student and party member, and even gets featured on the front page of Pravda, the official newspaper of the Communist Party — one of the Soviet society’s highest honors.

As the novel goes on, however, the inescapable horror of the purges begin to edge closer into Sofia’s comfortable life. First comes the arrest of a large number of physicians in the city, including a colleague of her late husband’s whom she always knew to be a good and honest man. Despite the fact that she can’t imagine him being an enemy of the state, she is trustful of the regime, remaining steadfast in her belief that nothing can happen to an honest man in her country.

Arrests continue, however, and creep increasingly closer to home: the director of the publishing house Sofia works at, whom she adored, is taken away. Then her closest friend, Natasha Frolenko, becomes a target of suspicion for speaking up against the senseless imprisonments, eventually being blacklisted from employment. Finally, and most devastatingly, her son Kolya is arrested, despite his fervent support for the regime and noteworthy contributions to Soviet society.

Naive and simple-minded, Sofia is unable to see through the lies of the regime. While devastated, she remains convinced that this is only a mistake; that such false imprisonment could never happen in a society as just as the Soviet Union. As such, she devotes herself to trying to rectify the mistake, believing that as soon as authorities know there has been an error they will willingly release her son. But despite spending weeks waiting in long lines and trying to gather information about Kolya’s arrest, the authorities refuse to provide her with any details or acknowledge her concerns. Eventually she learns that Kolya has already been tried and found guilty, sentenced to ten years of hard labor in a gulag prison camp without the right of correspondence.

By the end of the book, Sofia’s world has fallen apart. She is forced to abandon her son, as any efforts to help his case will undoubtedly cause suspicion and likely lead to imprisonment, deportation or execution. She has been fired from her job after suspicion aroused from her speaking up against the senseless violence. Her neighbors believe she is guilty by association and morally corrupt after the conviction of her son. Natasha, her best friend, is unable to handle the devastation of the purges and commits suicide. Sofia has no one left, cannot trust anyone, and is powerless to improve her circumstances. She doesn’t even know where her son is or if he’s dead or alive. Ultimately, she becomes delusional, unable — or perhaps, unwilling — to accept reality, instead living in an alternate universe where her son will soon come back.

Sofia Petrovna paints a chilling portrait of all the ways in which Soviet society was driven to madness by the Terror. In a world where anyone could find themselves guilty at any moment; where there is no distinction between truth and lies; where justice is nonexistent; where one accuses their neighbor so as not to be accused first, Sofia is forced resign herself to a life of bleakness, solitude, fear, and delusion. No one can be trusted — not even her own mind.

The book is also a powerful account of the devastating ways in which the purges destroyed people’s lives. By telling the story of the madness from the perspective of an average citizen and not a gulag prisoner, as so many of the works dealing with the purges do, Chukovskaya poignantly demonstrates the gravity of all that was lost during such a horrific and traumatic time. The work gives meaning to the remarkable number of people falsely accused and sentenced, how it affected families and personal relationships, and how it drove ordinary citizens to despair. By speaking the unspeakable and bringing back to life the forgotten, Chukovskaya humanizes the Terror’s countless victims and poignantly conveys to readers the unimaginable scope of the destruction perpetrated by the Soviet regime.

Chukovskaya’s work is a testament to the danger of the purposeful suppression of history. As stated by the author, “There were many people like Sofia Petrovna, millions, but when people are denied all documents, all literature, when the true history of whole decades is replaced by fictitious history, then the individual intellect is cast back on itself, on its own personal experience, and it works less well as it should.” During this era in Soviet history, the book all too hauntingly shows, to lose one’s trust in the regime meant to watch the entire world beneath oneself collapse. Sofia’s world — the entire Soviet world — has become so unmoored that it is impossible for her to save herself, her son, or her friends. All she had left to do was resign herself to delusions that her son was on his way home. “Lose that faith,” Chukovskaya states, referring to trust in the Soviet regime, “and you’re lost; nothing’s left but to hang yourself,” she concludes in the afterward, referring to Natasha.

Readers of all kinds will find value in Chukovskaya’s work. Not only is it a moving portrayal of the atrocities of the Stalin era and all that was lost, it is a brilliant and haunting account of the ease at which a society can fracture under government sanctioned lies and terror. Above all, readers will come away from Sofia Petrovna with a deeper connection to history — something all too important in a world where history looms large.