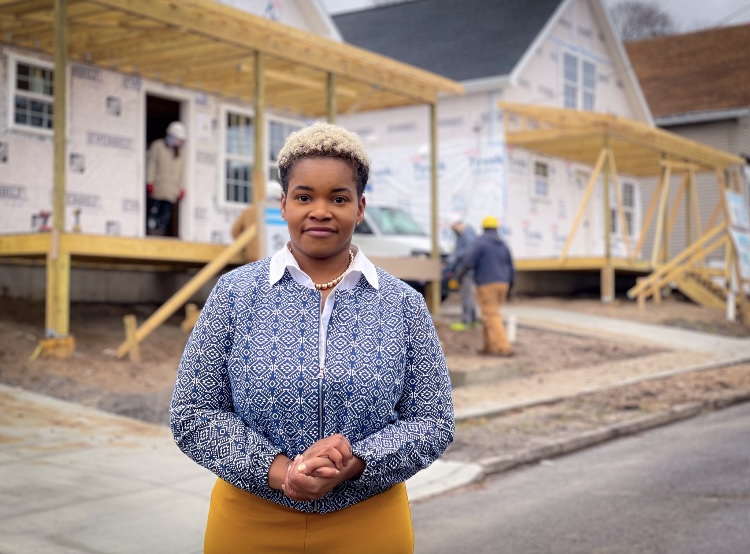 Defeating a sixteen-year incumbent won’t be easy, but India Walton’s never been one to back down from a challenge. She’s ready for meaningful and systemic change in Buffalo, and that’s why she’s running for mayor.

A longtime activist and community organizer, Walton is passionate about creating a better Buffalo. Walton’s long journey of public service began during her tenure as a nurse in Buffalo Public Schools, where she witnessed firsthand the devastating effects of underfunding schools, racial segregation and poverty. She would often witness overwhelmed teachers struggling with a lack of resources, or hungry children who were chronically absent or late due to not owning an alarm clock, or having to care for their siblings while their mothers were at work. As she saw the ways in which the system penalized children for their zip code, she felt a calling to fight for change in the community.

Walton’s compassion and resolve would guide her to the role of community organizer for Open Buffalo, an organization that fights to advance racial, economic, and ecological justice. Here her passion for criminal justice reform and affordable housing led her to become the founding executive director of the Fruit Belt Community Land Trust, where she worked with residents to create and preserve affordable housing in the historic neighborhood.

If elected mayor, Walton aims to use her platform to enact real systemic change in Buffalo. “I want to see a more progressive mayor,” Walton asserted. “I want to see rent stabilization, economic development for all people, neighborhoods improved across the city, not just in select areas. I want people to be able to be active participants in the democratic process and feel comfortable approaching their elected officials when something isn’t going right, and be able to get an answer.”

“This, to me, is not about only me becoming mayor,” Walton continued. “This is about proving to people, that you, everyday people, single mothers, nurses, teachers, the people who are solving our community’s problems anyway, this is the place for you.”

Walton’s opponent, incumbent Byron Brown, who is running for an unprecedented fifth term, will likely face challenges defending his sixteen year record. He will need to confront years of persistent rumors of corruption, bolstered by reports that a federal grand jury is probing connections between city contracts and the mayor’s campaign finances over the past several years.

Furthermore, the mayor will need to address frustration across the city over accusations of a lack of meaningful change on issues of racial injustice. The June primary election comes just a year after widespread protests over racial injustice and highly publicized Buffalo PD police brutality incidents, which are exacerbated by Buffalo consistently being rated as one of the most segregated cities in the country. Grievances over racial injustice led to a widespread petition last summer for Mayor Brown to resign, which has garnered almost 7,000 signatures.

Many young Buffalonians and progressives have expressed discontent over local leadership and are ready for change. “I think a lot of people see [Brown] as a Democrat, but he’s clearly just a status quo politician,” said Tia Brown, a Buffalo grassroots organizer involved in the petition.

“Byron Brown has been in office for fifteen years, and in that time he has not protected black and brown folks, or pursued justice or accountability for victims of police brutality,” she continued. “We need leadership, somebody who has a bigger and wider vision of social inequality and racial inequity.”

Other Buffalonians have expressed similar sentiments and criticisms. “As a young person who grew up in the city of Buffalo, I am frustrated by our city’s leadership,” said Elmwood Village resident Flora Cardoni. “Real leadership in Buffalo would look like actually leading, not waiting fifteen years and for a moment of civil unrest to — finally — put in some mediocre reforms in place that should’ve been in place a decade ago.”

To many progressive Buffalonians, Walton may be the fresh face in local politics they’ve been waiting for. Young and passionate, Walton carries with her a uniquely deep resolve to serve the people and make a real difference, undistracted by the expectations of the establishment. When asked about Brown’s leadership, Walton remarked, “He’s really doing the best that he knows how, but as a person who is a career politician, I think that maybe he’s a little bit detached from what folks on the ground are feeling.”

“Under the current administration,” she continued, “there’s a lot of silence. When there’s a problem, there’s no comment, no position one way or the other. That’s something that totally needs to change. There needs to be more accountability and transparency, especially when it comes to criminal justice and policing. I want to see the next mayor really flex that executive power when the time calls for it.”

Nevertheless, Walton acknowledges that this will be a challenging race. As a sixteen year incumbent, Mayor Brown will have access to as much money as he needs, a loyal group of campaign workers, a seasoned political machine, and the backing of business elites, unions and local party leadership. Brown’s extensive political network, which includes Governor Andrew Cuomo, leaves him with a wide array of resources at his disposal. Since 2005, Brown has raised and spent more than $5 million to win and hold the mayor’s office.

Despite the obstacles, Walton remains laser focused on the meaning of her work, refusing to lose sight of her purpose — fighting for Buffalonians. Win or lose, Walton hopes that her campaign can serve as a launching point for other progressives and organizers to run for office.  “This campaign is not about India becoming mayor,” she affirmed. “This campaign is about the people realizing and standing in our power, and to send a message to the establishment that you’re not safe.”