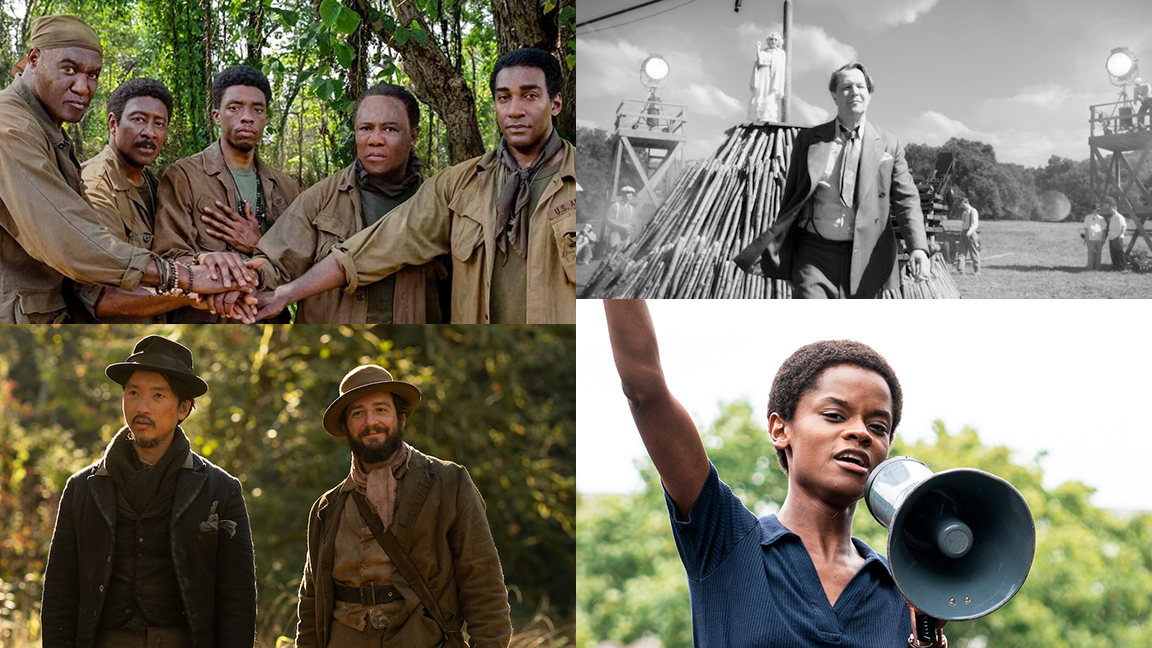 What a strange year! 2020 opened the start to a new decade with an overwhelming sense of dread and despair as the world seemed unsure if it were ever going to beat the Covid-19 crisis. However, there were still glimpses of unity and strength in this trying time, as people worked with one another to help their fellow neighbors from both close and afar, while people came together from all walks of life in efforts to demand racial equality. Each of the films listed here, in some way, is reflective of the current state of our world, and this crucial point in our cultural zeitgeist.

Time — “Our prison system is nothing more than slavery and I see myself as an abolitionist,” says Fox Rich, whose husband has been sentenced to prison for 60 years after an armed robbery. She is left to raise their family alone, but records their childrens’ adolescence in hopes to one day show her husband when he returns home. Time is a brilliant testament to the power of filmmaking, and though it may seem impossible to capture two decades of life in the span of an 80-minute documentary, director Garrett Bradley leaves us with something more extraordinary; capturing the love and loss found in life, not through chronological order or in a linear fashion, but juxtaposed across years to showcase the weight of absence and the gradual loss of hope.

Its final minutes are more satisfying and earned than anything you will find in a 10-film franchise finale, wherein that love for others and drive to do the right thing beats out—not the cracks—but gaping holes in our American justice system. An essential viewing for movie lovers and political advocates alike, Time is the greatest film to come out in 2020. Now streaming on Amazon Prime.

Sound of Metal — Darius Marker’s directorial debut is a revelation; taking a subject matter that most audiences could never truly understand—deafness—and placing them in a world of silence. This original style of sound editing and mixing makes the story one that is both empathetic and important, as lead actor Riz Ahmed (Nightcrawler) proves he is one of the great rising stars in the industry today, playing the role of a metal drummer who has to come to terms with his disadvantage. Surrounded by a cast consisting of mainly deaf people, rather than Hollywood actors pretending to be within this community, this Amazon Prime original is a step forward in representation and more than deserving of all its praise since its release.

Da 5 Bloods — Spike Lee has had quite the comeback in recent years since his 2018 smash-hit BlackKklansman. This year, Spike continued the legacy of David Byrne and the music of Talking Heads with the euphoric concert film American Utopia. However, it is this Vietnam-war tale of brotherhood, lasting trauma, the weight of regret, and a terrifying prediction of where America is heading that feels right at home with the rest of the filmmaker’s work. The entire cast is wonderful, especially Delroy Lindo in a well-deserved comeback role, but it is the late Chadwick Boseman who steals the spotlight here, shown in flashbacks as the veterans’ friend whom they wish to give a proper burial. Now streaming on Netflix.

First Cow — A positive way to look at the effects that the coronavirus pandemic has had on the movie industry is that the postponing of major blockbusters paved a new opportunity for independent film to gain some more recognition. Kelly Reichardt’s First Cow is no exception, telling a simple story of a friendship bond formed in the early 19th century and the eventual success these two men would find from their discovery of a dairy cow in town. The American Dream is just a fairytale for most people, yet the effects of our economic system leave citizens no choice but to try and chase this fabrication of truth. First Cow gives an introspective look into such a reality with ease. Available for rental on Amazon and iTunes.

Bad Education — There have been plenty of stories regarding corruption and the abuse of many by the few in recent years, though Bad Education stands among the rest by really letting its audience fall in love with the most despicable of people. Tackling a true story of a Long Island high school embezzlement scheme at the turn of the century, we are shown a true abuse of power by the professionals with whom we are supposed to feel safety and security. Hugh Jackman and Allison Jennie give it their all here. IndieWire critic David Ehrlich put it best: “The incredible magic trick of Corey Finley’s Bad Education…[is] inviting sympathy for the devil even after it convinces you why he should go to hell.” Now streaming on HBO.

Small Axe: Mangrove — The first film in Steve McQueen’s anthology collection of stories centering around the lives of London’s West Indian immigrants, Mangrove is deservedly getting the most buzz for its raw portrayal of racial injustice at the hands of the Metropolitan police. As a new black-owned restaurant opens up in Notting Hill, both its customers and owners are consistently harassed by officers until there is no further room for passivism, leading to protests in the street that, of course, are deemed “riots” by those perpetuating the abuse. What McQueen has created here is so distinctly important because it is not simply a protest film, but rather one that prefers to celebrate the lives and culture of the West Indian community despite all the odds stacked against their people. The courtroom drama that follows is nothing less than brilliant. All five of these films are available on Amazon Prime.

Mank — David Fincher’s black-and-white feature about the creation of the Citizen Kane story by screenwriter Herman Mankiewicz takes its own liberties from the truth of the story, but it is an absolute treat for fans of the industry and those still nostalgic for the classic Hollywood movies. Gary Oldman plays wonderfully as the controversial writer who is slandered for his left-leaning political views at a time where conservatism was much more of a norm for the biggest stars, and it makes for a captivating character piece with parallels to the influence of movie stars still present in today’s world. Now streaming on Netflix.

I’m Thinking of Ending Things — Charlie Kaufman’s work (Being John Malkovich, Synecdoche, New York) is one that often blends the mainstream with the arthouse. In his latest feature, we are presented with a story of a couple who go and visit the boyfriend’s family for the first time. I hesitate to dig further into a plot synopsis because, not only would that be spoiler territory, but it also essentially impossible to sum up I’m Thinking of Ending Things in just a few sentences. Complete with an existential horrorshow of a road trip, a hilariously awkward dinner sequence that jumps through past and present, and, most of all, Kaufman’s trademark awkwardness, this may not be the movie for everyone, but it is certainly one of the most unique experiences to be had in cinema all year. Now streaming on Netflix.

The Invisible Man — Elisabeth Moss carries the show here as a survivor of an abusive relationship who seems unable to escape her past. Of course, it does not help when her ex-boyfriend creates a suit that can literally turn him invisible in order to further torture the one person whom, with all his power and fortune, he could not control. Director Leigh Whannell presents a truly terrifying thriller about overcoming the odds and the psychological toll that comes when nobody believes your story, making for a very relevant 21st-century feminist tale. Now streaming on Hulu.

Borat Subsequent Moviefilm — What initially looked as nothing more than a cash grab and a poor attempt to recreate lightning in a bottle, Borat’s sequel set in Trump-era politics, internet conspiracies, and, surprisingly, the quarantine lockdown makes for the funniest comedy of 2020. Borat has returned to America, with his daughter Tutar (Maria Bakalova, who better get an Oscar nomination for best supporting-actress), but this time the Kazakhstani star does not seem as far off from the world as once before. Times have rapidly changed as political divides have furthered, making this satire feel more like a documentary in which Sasha Baron Cohen begging for a better future and less like the mindless, slapstick comedy that much of its audience believes it to be. Wawaweewa! Now streaming on Amazon Prime.

Films that may have made the cut, had I seen them in time: Another Round, The Assistant, Dick Johnson Is Dead, Kajillionaire, Ma Rainey’s Black Bottom, Minari, Never Rarely Sometimes Always, Nomadland, One Night in Miami, Palm Springs, Possessor, Shirely, Shiva Baby, Soul.