Kid Cudi—Man on the Moon III: The Chosen 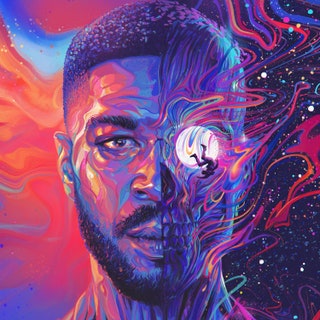 Kid Cudi is undoubtedly one of the most influential and talented rap artists of the 21st century, practically originating the fusion of electronic and hip hop that dominated the mainstream of the 2010s.

Despite this, Scott Mescudi is 36 years old and beginning to fade from the culture consciousness after experimenting with punk and leaning harder into his electronic influences. His 2018 collaboration with Kanye West KIDS SEE GHOSTS was highly regarded as one of the best albums of that year and he’s followed up that momentum with singles featuring names like Travis Scott and Eminem.

To those who have followed his career to this point, Cudi’s newest album in his series, Man On The Moon represents the fulcrum of his career. It begs the question if Kid Cudi will be known for either for his influence on the next generation, or do what he did so masterfully a decade prior – revolutionizing the sound of modern music.

Similar to past projects in the Man On The Moon series, the third installment, named The Chosen, is filled with themes of depression, heartbreak, and a loneliness in his own skin. Cudi knows he’s a deeply troubled individual and pours his heart out on tracks like “Elsie’s Baby Boy (Flashback)” and “Tequila Shots” in particular. Ultimately, Scott is an empathetic artist and more importantly, an incredibly talented storyteller in the way he outlines the Man On The Moon albums. Despite the similar themes and signature Cudi sound, all three seem like wholly separate slices of that time in his life.

Behind the hums, behind the lowkey beats and hooks, Kid Cudi’s ability to reach a generation of misguided youth was and still is the key behind his success. He’s able to speak to a generation with the highest rates of depression and anxiety and you simply can’t quantify or review the connection Cudi retains with his audience.

The last album in the MOTM trilogy is not without its faults, but overall, Cudi retains the momentum and delivers a fitting ending to a series that tackles his depression and anxiety. His beats are that simple but signature drum pattern, sometimes accompanied by guitar, synth, bass, etc. but they all contribute to a slow and steady beat that Scott can harmonize with. There are some notable changes to this style in the songs “She Knows This” and “Show Out (with Skepta and Pop Smoke)” but Cudi seems drowned out by the beat and outshined by Skepta working in his element. Other than this though, you see some Travis Scott adlibs sprinkled in through different songs and Trippie Redd influences in beats like “Dive” and “Rockstar Knights” where he has an admittedly decent feature (sorry, I’m not a fan). Scott’s features on this album are obviously carefully picked from what he likes at the moment and they bleed into the album while still retaining the Kid Cudi sound.

As I said before, Cudi’s biggest strength is his storytelling ability and the way he builds up to the finale is really something to be admired. In previous MOTM albums the songs have been haphazardly placed and all the story-telling elements have come from individual songs, so to see the growth and how each song and story within it develops into at the end just makes it all the more sweet. This album builds itself up in terms of storytelling and in quality. The first 4 songs are a very strong introduction but it takes a hit after the grime-influenced track “She Knows This” and takes some time to build itself back up to Cudi’s prime at the very end. The 5th and 6th tracks are by-the-numbers Cudi songs and they rely far too heavily on his humming and hooks. The third is another grime-inspired track but instead of pushing his sound in new directions, it comes off sounding like just another local rapper. Not bad, but sorely disappointing.

The real meat of the album are the subsequent 6 tracks where you can see Kid Cudi be the best version of himself as an artist. This means that signature slow run-up to songs with mellow beats and hums to accompany Scott’s excellent storytelling. His lyrics punch their way in front of the beat and Cudi’s smooth but heartbroken voice delivers them perfectly. The worst I can say about these tracks are that they don’t try to experiment with the sounds and themes commonly associated with the MOTM trilogy. Instead, Cudi refines his sound, bringing back more nostalgia from the first time you heard his songs in the early 2010s rather than looking forward to what he might release in his next album in the early 2020s. Despite this, Cudi undoubtedly delivers a succinct and successful middle section of the album and caps it off with an exceptional feature by Phoebe Bridgers. You could tell he was building to something though, and the final four tracks of finale for both album and series cap conclude Scott’s decade-long story of anxiety and depression.

This finale is a victory lap not only for Cudi, but for every kid that laid awake at night listening to his music in their angsty teenage years. The beats and lyrics are buoyant and hopeful with synths and drums that make your brain ooze with serotonin. He reflects how his struggle with depression has made him the man he is today and the impact his music has had on the next generation of kids and artists, evident when you hear adlibs from Travis Scott and features from Trippie Redd.

All of this underscored by a developing relationship with God that Cudi found. It’s a beautiful and heartwarming realization that, despite the long and winding road, it was a necessary journey to make. In doing so publicly and shamelessly, he also guided others through their own path.