Let’s Rethink Our Stance on Snobs vs. Slobs 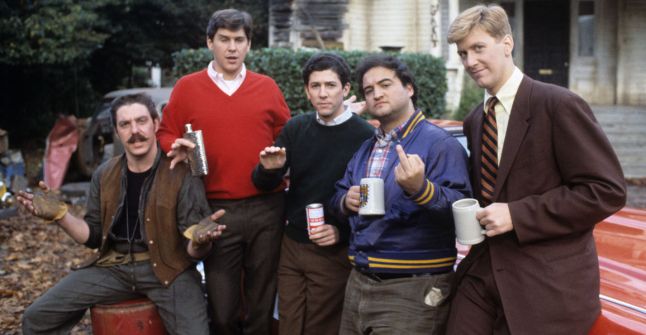 On August 8, Donald Trump held a campaign event at his own Bedminster Golf Course in New Jersey, giving a speech for an audience of country club members. The appearance was criticized for a number of reasons: It’s unconstitutional for a sitting president to drum up business for a property he owns. It’s unseemly to blur the lines between his business venture and his re-election campaign. The maskless, tightly-packed crowd was a social distancing nightmare (which violated New Jersey’s COVID guidelines). And of course, the unfortunate optics of Trump limiting his audience to an overwhelmingly white and male crowd of people who have paid a country club membership fee estimated to be over $300,000.

But looking at the photo of the Bedminster crowd, the thing that struck me about this crowd of rich guys (and it was almost entirely guys) was this: these are incredibly privileged people with massive financial resources, and not a single one of them could come up with a better wardrobe choice than a tucked-in polo shirt.

Which, naturally, makes me think of movie comedies.

One of the most tried-and-true genres of film is snobs vs. slobs. The crass loudmouths who, deep down, are smarter and more fundamentally decent than the aloof, self-centered, cultured rich folks who look down their nose at the rest of us. It’s a tradition as old as the Marx Brothers’ movies of the ’30s, where the wisecracking brothers would cause mayhem and throw the upper crust into a tizzy.

Except over the years, something changed. The Marx Brothers could play the underdog on film because they were underdogs—uneducated Jewish immigrants who had to fight their way into show business. By the late 1970s, slobs vs. snobs movies like Animal House and Caddyshack were written by WASPy Harvard graduates who still managed to see themselves as the ones sticking it to the elitists. Jump ahead a few more decades, and it might be time to re-think this trope. Who exactly are the underdogs in 21st-century America, when the NPR-listening, chardonnay-sipping snobs are underpaid teachers and the tucked-in-polo-shirt-wearing crowd are serving fast food hamberders on expensive china?

It’s time for America to start rooting for the snobs. And what better way to make that happen than flipping the script on our snobs vs. slobs movies: Ellen Page and Samira Wiley as a couple who cook up a revenge scheme involving their extensive collection of tote bags when the homeowners association calls the police on their kid’s lemonade stand. Lakeith Stanfield as a PhD candidate trying to finish his dissertation while being driven mad by his neighbors blasting the Dave Matthews Band. An Animal House reboot where we root for the students trying to get the most of their incredibly expensive education without a bunch of obnoxious frat boys destroying everything they touch. Get on it, Hollywood!

Mike Vago is the host of Why Is This Not a Movie? on the Subject Podcast Network and History Lesson Part 2 on Subject Radio. His sixth book, The Planets are Very, Very, Very Far Away comes out in early 2021.