A Short History of ‘Defund the Police’ 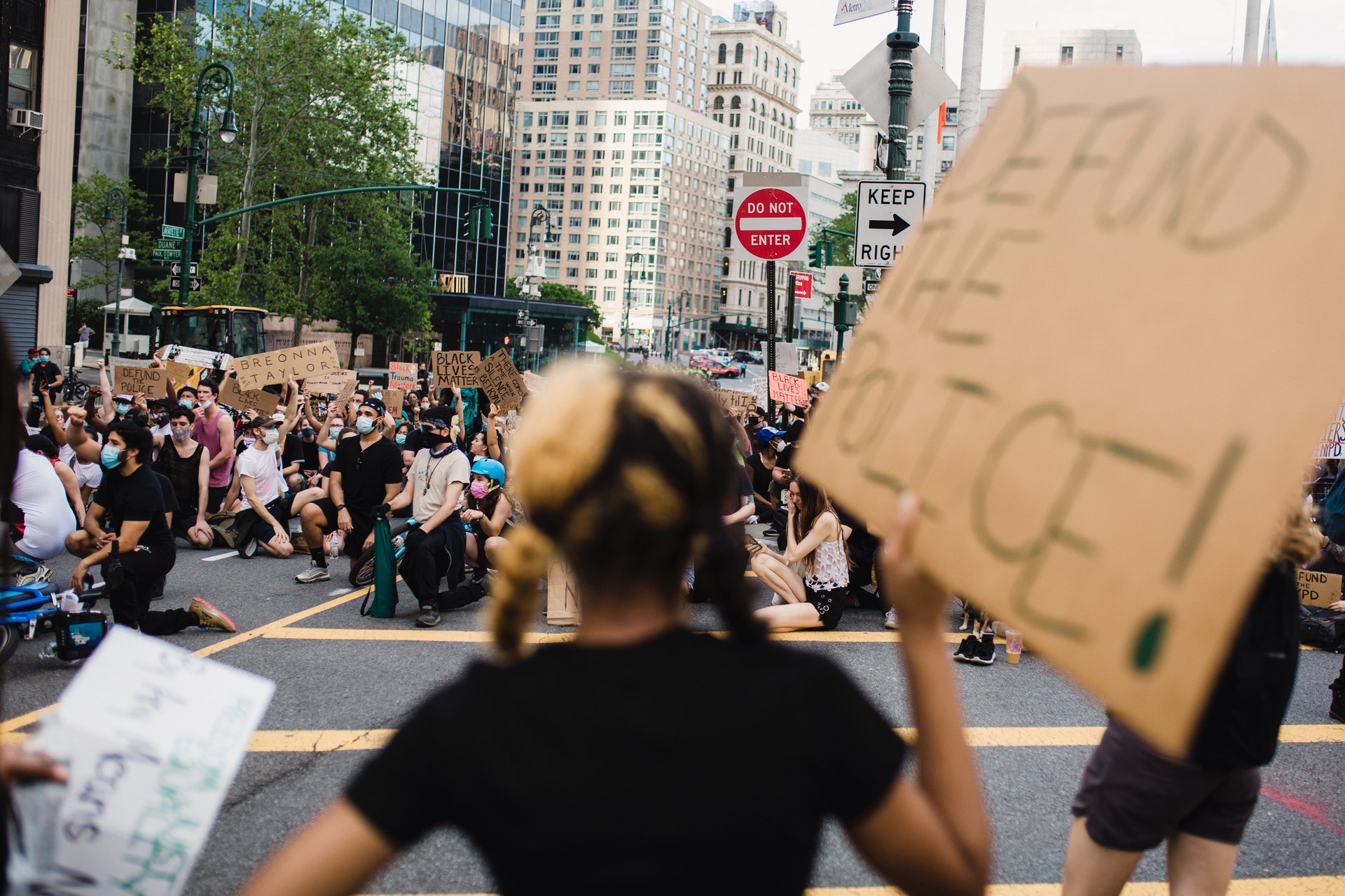 The phrase has been around for decades, so what makes it important now?

A slogan can be a powerful statement. Whether trending on social media, chanted in protests or denounced with fury in presidential tweets, it’s no secret that the words “defund the police” are contentious. Exploding into view this summer after the police killings of George Floyd, Ahmaud Arbery, and Breonna Taylor, calls to defund the police — and criticisms of the idea — have taken center stage in national debates about police reform and racial inequality.

Despite its recent explosion, the phrase did not come out of nowhere. The idea of defunding the police has been circulating in activist and academic circles for decades before it shifted into national focus this summer. At its core, the phrase is rooted in the history and politics of American policing. So how exactly did the idea of defunding the police arise, and what does it really mean in this tumultuous moment in American history?

In order to answer these questions, we must turn to the history of American policing — how and why we got to this point, and what this history has meant for millions of Americans.

Our story begins in the 1960s — one of the most turbulent and divisive decades of American history, marked by the Civil Rights Movement and Vietnam War. During this era, American society underwent sweeping cultural, social, and political changes. To the disdain of many conservatives, these events ushered in an end to racial segregation and disenfranchisement, greater questioning of the status quo, and Lyndon Johnson’s Great Society initiatives, a sweeping array of social programs designed to eliminate poverty and racial injustice.

Towards the end of the decade, following the assassination of Martin Luther King Jr. and increasing consciousness about the reality of the Vietnam War, protests swept over the nation. Along with anti-war demonstrations, black uprisings arose against decades of employment discrimination, low-paying jobs, poor housing, ever-present police brutality, and lack of meaningful opportunities in cities. These protests left conservatives and many white Americans fearful of what they saw as a disintegrating social order and black lawlessness.

This is where Richard Nixon comes in. The rebellions, along with a white backlash against the civil rights gains and social programs of the 1960s, led Nixon to embrace the idea of law and order as the focal point of his presidential campaign. Nixon called on the “silent majority”— a term used to denote those who were not protesting — to support him in an attempt to restore the old social order. He successfully used fear tactics (rife with racial undertones) and appeals to return to the times before the tumult of the Civil Rights Movement, Vietnam War backlash, and his predecessor’s Great Society programs to win the presidency.

The election of Nixon marked a shift in the national focus away from the ills of systemic racism and towards a narrative that depicted urban black protests against inequality as lawless disorder that would require an intense police presence. Rather than address the unfinished work of the Civil Rights Movement, crime increasingly became used as a political tool to distract from the inequalities that permeated American society (uncoincidentally, the same inequalities that were responsible for the 1960s riots). Thus began a decades-long process of drilling into Americans’ minds the idea that crime was a constant threat, even as cities became safer.

Over the years, the politicization of crime continued to grow until the War on Crime became the preeminent national policy to deal with societal problems. Ronald Reagan’s War on Drugs can be seen as the culmination of this consequential shift in American governance. In his campaign for the presidency, Reagan vehemently promised to be tougher on crime and those he described as “welfare queens” — a term he popularized, again rife with racial undertones, to ridicule those who relied on public benefits. At its heart, the term was meant to rally anti-poor sentiment and support for cuts to the welfare system by implying that black people were too lazy to work, instead of taking advantage of public benefits that were paid for by the rest of citizens.

Once elected, Reagan cut back on social and anti-poverty programs that were essential to address racial inequalities. In replacement of these programs, he drastically increased the federal government’s role in fighting crime and engineered a whole host of unforgiving “anti-crime” measures. Almost immediately after he was elected, Reagan’s Justice Department announced its intention to cut in half the number of specialists assigned to prosecute white-collar criminals and to shift its attention to street crime, especially drug enforcement. In order to gain popular support for this War on Drugs at the state and local level, the Reagan administration launched a national media campaign that sensationalized the emergence of crack cocaine in inner-city neighborhoods that had been devastated by industrialization and skyrocketing unemployment. Thus, by the 1980s, the politics of punishment, rather than addressing the root causes of social ills, was in full swing.

This political weaponization of crime marked a seismic shift in American politics that would permeate administrations and party lines for decades to come. Rather than focus on the societal problems that result in higher crime rates, the Democratic Party, fearing accusations of being “soft on crime,” joined Republicans in championing policies that prioritized law enforcement budgets at the expense of social programs. It became political suicide for any politician to suggest decreasing spending on law enforcement. Despite the job discrimination, unaffordable housing, and structural inequalities that contribute to crime, Democrats and Republicans alike have embraced the politics of punishing, rather than offering solutions to, victims of institutional racism.

This bipartisan shift in attitudes and priorities has resulted in drastic increases in law enforcement budgets. This skyrocketing increase in police funding has continued long after crime rates began to fall in the early nineties. Despite the fact that the 2010s were one of the safest decades in American history, the belief that crime is high and cities are dangerous is still widely held, which allows our leaders to justify over-policing. As a result, state and local spending on police increased from forty-two billion dollars in 1977 to a hundred and fifteen billion dollars in 2017, adjusted for inflation.

To put it into perspective, Los Angeles’ budget currently gives police $3.14 billion out of the city’s $10.5 billion. Spending on community services in L.A., such as economic development and housing, pale in comparison to the LAPD budget at $30 million and $81 million, respectively. In New York City, the police budget amounts to more than what the city allocates to health, housing, youth and development, and job programs combined. These massive disparities between policing budgets and those of city agencies are not unique to Los Angeles and New York — this is a common practice across America’s cities.

As funding for areas that are essential to the health and prosperity of communities has decreased, low-income communities continue to be trapped in the cycle of poverty and desperation, which remains a significant contributor to crime. In addition, police have become expected to take on the roles of mental health workers, social workers, addiction treatment experts, and more, essentially filling in the gaps where city services are not adequate (despite being poorly equipped to do so). This increased police presence and reduction of anti-poverty programs and social services have resulted in further disadvantaged communities, increased crime, overburdened police, and fewer opportunities for advancement within low-income communities.

In addition to perpetuating social ills, this heightened policing of low-income communities has resulted in detrimental forms of institutional racism and police brutality. Since the 1980s, thanks in part to the United States Supreme Court (which stripped away Fourth Amendment protections against unreasonable searches and seizures by police where narcotics are involved), the War on Drugs has become a more generalized war against citizens who are poor, black or brown. This has led the U.S. to have not only the highest rate of incarceration in the world but also a disproportionately large rate of imprisonment of black men. (Just to put it into perspective: eighty percent of all arrests, especially in black and poor neighborhoods, are for minor offenses like traffic violations and marijuana possession.) Essentially, through a comprehensive and well-financed system of racial oppression, police and the criminal justice system have used mass incarceration as a primary tool for enforcing discrimination under the guise of protecting the community.

At the same time, the war on drugs and an increase in police surveillance has given police justification to enact lethal violence on communities of color especially, and almost always with impunity. In combination with “warrior-style” police training, which has helped create a police mentality that supports the use of excessive force, this has resulted in much higher instances of police brutality in the U.S. than other developed countries. Since 2015, police have fatally shot approximately 1,000 people a year, and the rate that police have killed black people is more than twice that of white people. (In comparison, the developed country with the second-highest rate of fatal police shootings is Canada, which on average has 25 fatal police shootings a year.) Despite its ostensible intent to protect the public, increased policing has done the opposite — it has become a major contributor to violence against black citizens, and a powerful enabler of systemic racism.

Essentially, we have substituted real solutions that would address societal problems and inequalities — major underlying factors that contribute to crime — with a greater police presence, which has only exacerbated social ills, overburdened police to try to solve every societal failure, worsened systemic racism and made lower-income communities worse off.

The call to defund the police

At its heart, calls to defund the police recognize the deep-seated problems that arise from over-policing communities of color, the lack of funding for essential social services and programs that begin to remedy systemic inequalities and social ills, and the police brutality deeply embedded in many of America’s police departments. While it may sound extreme, the idea is rooted in the basic premise that increasing policing simply is not an effective way of solving decades of deep-rooted structural problems.

Consequently, defunding the police calls for reinvesting a portion of enormous police budgets into crucial and often neglected areas like education, public health, affordable housing, youth services, drug rehabilitation programs, mental health services, and other social services. (Contrary to how it may sound, defunding the police does not mean abolishing law enforcement.) Activists argue that by investing in communities, rather than punishing them for structural failures, we would reduce crime by addressing social problems at their root. In this view, by providing communities the resources and opportunities they need to thrive (rather than depriving them of resources essential to overcoming the cycle of poverty and inequality) and reducing the burden on the police to solve every societal problem, we would ultimately create a safer and more equal society.

No matter what side of the political spectrum one identifies with, understanding the history behind the phrase “defund the police” begins to answer important questions about why it has taken center stage in national debates about racial inequality and police reform. If nothing else, understanding this history offers valuable insight into the making of American society as it is today — insight that is essential if we are to think critically about the present and contribute meaningfully to a better, more fair future.