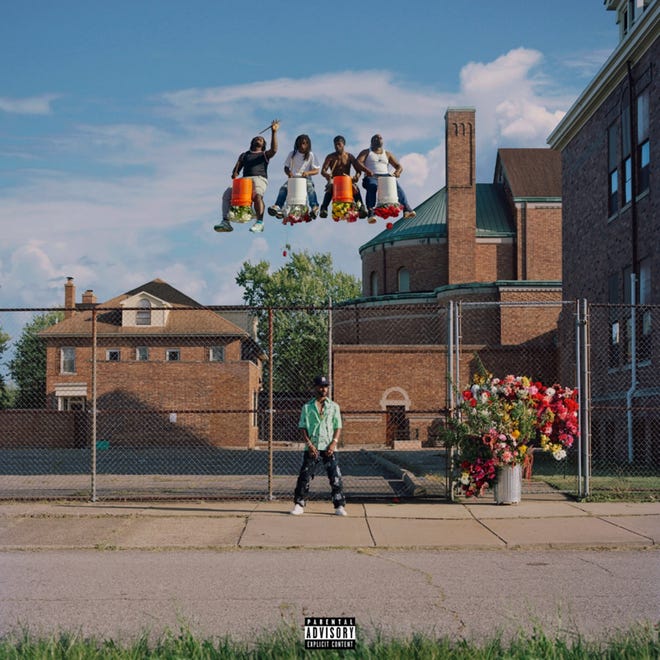 Since his initial rise to fame, due to meeting and freestyling for Kanye West at a Detroit radio station in 2005, I’ve been a fan (not exactly since then; I was 6 at the time—I’ve probably been a fan since “Lamborghini Mercy”. I’m fake, I know). Following a three-year hiatus in project releases, the album is named as a successor to his 2012 mixtape Detroit (which actually crashed the mixtape downloading site Datpiff when it was released) and because of this, chiefly deals with his personal growth in the 8 years since Detroit’s release. It’s no surprise then that Sean has come out since the album release discussing the mental health issues that were plaguing him during the album’s recording or that this album follows a ‘kind of’ engagement announcement from Sean and Jhené Aiko earlier this year, when he described their possible marriage as ‘in the works’ on Instagram live .

Overall, the album is more ambitious in terms of volume as opposed to any real stylistic change, but the volume (21 songs) is definitely impressive. Just as impressive as the volume is that half of hip-hop’s A-List is featured in some way on the album. Starting with two (of only six) solo songs, the album first features the late great Nipsey Hussle, who is then followed by Post Malone, Ty Dolla $ign, Jhené Aiko, Anderson .Paak, Lil Wayne, Eminem, Travis Scott, Young Thug, among others. Unfortunately there are a couple notables who were present for the first but didn’t return for the sequel which is a little disappointing, namely J. Cole (Sean stated that they tried but couldn’t make it work for this one,) and Kendrick Lamar. In addition to the laundry list of features, Sean gives a nod to the original Detroit mixtape with a couple “Stories” in which a couple celebrities share stories about Motor City, including Dave Chappelle, Erykah Badu, and Stevie Wonder.

Recently it’s become a little cliché to start a rap album with a hype song dripping with 808s and triplets, moving away from the previously clichéd slow, soulful gospel opening. While Big Sean did take the trap bait with “Why Would I Stop?” it can be excused because of how good the song is. Ultimately, I do like the first song but “Lucky Me” is probably the best song on the album, or at least the one that deals with the realest issues he’s had to contend with. In “Lucky Me,” Sean discusses for the first time the heart condition that he had at 19 years old and how he has doubts about Western medicine, specifically because he treated the condition holistically with magnesium as opposed to with a pacemaker, like his doctors had recommended. Nipsey Hussle’s feature on “Deep Reverence”, another contender for best song of the album, is full of the same type of posturing that Nipsey was known for (“I’m a street legend”) but as true as it was during the recording it’s unfortunately become truer due to Nipsey’s death in a late 2019 drive-by. I loved the Jhené Aiko feature on “Body Language” (Ty was good too but Jhené is always a killer). It’s such a good slow jam that it’s going to be added to my bedroom playlist full of ‘90s RnB. “ZTFO” is fun but for me it’s ultimately a detractor for the album, especially because it’s way too fast to do Xanax to.

Anderson .Paak’s feature on “Guard Your Heart” is a very classic .Paak feel, full of soul and poetic double-entendres. Incidentally, .Paak has a pretty important verse regarding the BLM protests that you should listen to even if you don’t listen to the whole album. I wasn’t expecting there to be another bedroom playlist worthy song on the album but TWENTY88 (Big Sean and Jhené Aiko’s collaborative group) really came through with “Time In”, and the fact that Keith Sweat opened it up really cemented another spot on my list (just as an aside, when having people read this article a lot of my friends revealed that they don’t know who Keith Sweat is, so if you don’t know who Keith Sweat is, you’ve got to step up on your RnB). I really liked “Don Life” even if it did kind of sound like “Right Above It”, the Lil’ Wayne and Drake song from 2010 that they used as the Ballers theme. Seeing as Lil’ Wayne features, it makes sense that it’s full of the Wayne horns and championship team vibe that helped make him so popular in the late ‘00s.

The longest and feature heaviest song of the album, “Friday Night Cypher” is full of established Detroit emcees as well as some up and comers, essentially the biggest members of the Detroit rap scene. There is something really weird to me with cyphers being used as individual songs, especially in cases like this where the beat changes up entirely several (i.e. 4) times. It reads a little odd but ultimately is a good showcase of Detroit’s top talent, moving from some of the more party rappers like Kash Doll to underground legends like Royce Da 5’9” to hip hop royalty, Eminem. To be fair, it was a cypher, which aren’t exactly known for thematic complexity. The finisher song, “Still I Rise” was okay, but ultimately fell flat as a closer. Personally I believe that moving “Story By Stevie Wonder” up in the track list and ending on “Cypher” would have been a lot stronger.The only real complaint about this album that I have is that certain songs should probably have been omitted. Personally, I feel that “Wolves”, Post Malone’s feature, wasn’t really all that great and could’ve been kept off, as well as a couple of the other songs I didn’t really mention in the writeup. For some of the songs and features that we could’ve left off, it’s disappointing to see some glaring pieces missing from the album. Not just people we expected, like J. Cole and Kendrick, but how are you going to do a song full of Detroit rappers (“Friday Night Cypher”) without Danny Brown? He is a bit weird, but having him on the song could’ve provided a flavor that would definitely be beneficial overall to the song. Ultimately, however, Detroit 2 lived up to the hype from the first mixtape and satiated the long  wait for another Big Sean project. His lyrical style and ability to collaborate well with other artists have firmly planted this album as a top contender for the year and stand testament to his talent. I’m extremely happy to see him overcoming his depression to return to the rap game.